LAND BETWEEN THE RIVERS
-- Western Kentucky -- 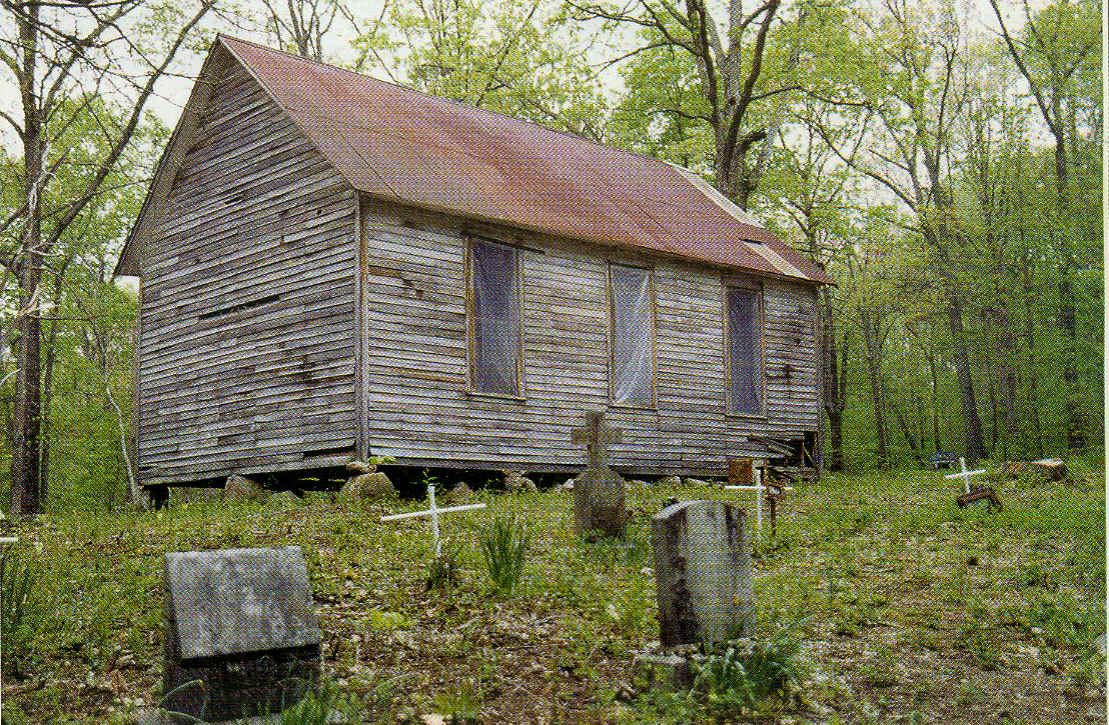 -- Left standing because it was forgotten. --
-- Now, left standing as a symbol to never forget! --

It is stated that God works in mysterious ways. And so it is with St. Stephen's Church. Nestled deep in the woods in what is now known as Land Between the Lakes, in Western Kentucky, this church carries a history that is important to the families that were forced out of the land that was between the Cumberland and Tennessee Rivers, before two dams were created that turned it them Lakes, and the land into LBL, or Land Between the Lakes.

The reason I say God works in mysterious ways is because, St. Stephen's Church is important not because it was a successful on-going church, but because it wasn't. Built in 1900, thru the years St. Stephen's Church went thru a number of improvements, until it was closed and abandoned around 1942. Then it just stood there, like a sacred monument, waiting for its next purpose.

When the dams were built, of course people that lived along the flood waters were forced out. They were paid an unfair price for their land and were forced, with lingering bitterness and resentment, to move elsewhere and start a new life.

In 1963, president John F. Kennedy flew over Land Between the Lakes, some say, and decided to declare all 172,500 acres a National Recreation Area. At this time, or shortly after, responsiblity was turned over to the Tennessee Valley Authority to purchase all remaining non-government-owned property, take it by force, if necessary, from the present occupants, -- or by "condemnation," as they called it, -- and begin the process of tearing down all the businesses, towns, buildings, homes, churches, and structures in LBL. So again, but this time not out of necessity or for the sake of progress, people that had developed a unique beloved lifestyle and culture in between the rivers, were forced to sell their lands and homes; but this time, not at even close to a fair market value.

There were over 60 churches in Land Between the Rivers at this time, and to keep the people from returning to them and from continuing to worship there, the churches had to go. The offical public reason stated for this needless destruction was, of course, to "turn it into a wilderness recreational area." So TVA began the process of burning down, and bulldozing, as many churches as they could find. Except, they misssed one!

St. Stephen's hadn't been used since 1942, and had been forgotten. The road to it had become impassable, even with four wheel drive vehicles. TVA may not have even known it was there. Or perchance they felt that since it was forgotten, it was safe to leave the church standing. At that time TVA made a promise to all the families that were forced to move out of Land Between the Rivers: That LBL would always offer free access and free use of the land, and that they would never commercialize or privatize the land.

But when has the government ever kept one of its promises? Today the families that developed a unique way of life in Land Between the Rivers, and their descendants, are forever fighting the government and its efforts to introduce commercialization into the area. Families that had to move out, and their descendents, still, today, forever struggle to force the government to keep their original promise of no commercialization or privatization. They can never forget their unique "Mesopotamia," or, their land known to them as their beloved "Land Betwixt the Rivers."

And today, St. Stephen's Church stands as a sacred monument to remind us to never forget. Because it was forgotten, it now stands as a perpetual memory of a people who developed a unique way of life in Land Between the Rivers.

Back To Main BTR Page